It occurs to me that most people probably haven’t bothered to look at the ducks I use for this project (shame on you), and fewer still have bought any (which you can do here, by the way – let me know if you want to order any, though, as the postage is quite steep and I can just add any to my own next order).

So, what I begin with are a few ducks in each pack that look like this: 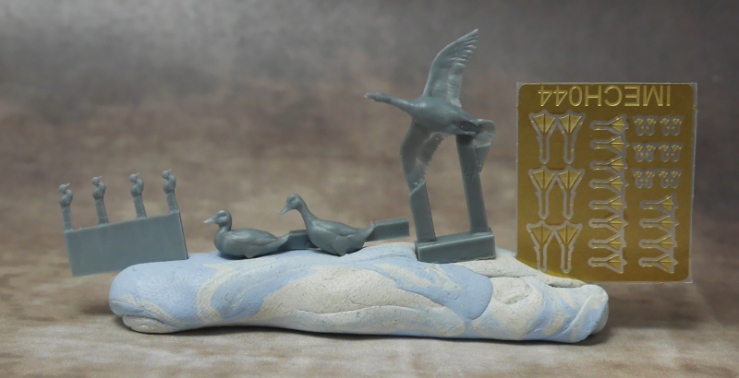 There’s also a goose, but I don’t care about those too much (I just gave away a whole bunch – let me know if you’d like one and I’l bring them to the next show we’re both at).

Anyway, as you can see, there are ducklings, a sitting duck, a standing duck and a flying duck. The flying duck is difficult to use because you still need to create the illusion that they’re in the air. Normally you’d hide a pin in the wing and have that in contact with something, but, as you can see, the wings are essentially transparent. I’ve used the wings on other ducks (like the magpie duck), and the head is pretty handy for ducks that have a more streamlined profile, but otherwise those don’t get used either.

The ducklings are absurdly tiny and basically impossible to convert (although I did convert the falling duckling in the wood duck scene), so they have limited use, too. This means that I have a sitting duck and a standing duck to fill in for every possible variety.

(Many of you have seen me hunting for duck models at shows – this is why.)

So, if you’ve ever paid much attention to ducks at all, you’ll probably note that the females in most varieties have very similar colouring – the men are gaudy and ostentatious, and the women are camouflaged to hide from the men. This is partially why the majority of the ducks I’ve done are male, but it also helps to explain why I have to convert them so often – if I didn’t, all of the females would probably end up looking very, very similar.

So, when converting the model, I look at a few key features of the duck:

This accounts for the overwhelming majority of all the differences you can really see at this scale. A few have extra things like tufts on their head (like the scaups and tufted peking) or sail feathers (like the mandarin), but that’s not been too much of a concern. Sometimes the heads are a bit more streamlined, as I mentioned earlier, like the torrent ducks.

Anyway, with the details set, I then have the great joy of cutting up models that are already tiny in order to add or remove other tiny things. This is how you end up with things like this:

Above are a couple of comb ducks (so named for the combs on top of the bills), who are still waiting for a base, a shelduck (note the tail and the bill), and a northern pintail (note the tail, obviously). Other than the structural changes, about all that’s left to tweak are the poses, hence the pintail’s turned head.

It should be noted that I really, really don’t like sculpting, so, if you happen to be thinking about starting a model company or plan on producing some accessories, a few extra ducks wouldn’t go amiss.