A few more weeks down, and a few more ducks prepared. I finally got around to cracking out my new airbrush to paint the cayugas’ base, and I’m pretty happy with it. I’ll need a little more practice before it’s really a prime tool in the toolchest, but it’s certainly a step up from my last couple of airbrushes, which were decidedly shite.

So, first up are the completed cayugas. I went with a sort of mudflats setting. Lake Cayuga has a whole host of different environments, so I was pretty free to pick and choose what I wanted them to be doing, but I also had this set of paper plants that I was keen to try out. I quite like them, but they’re quite fiddly. I ended up using a heavier gauge of wire for the stems because the wire supplied probably would have bent under the weight of the paper leaves… 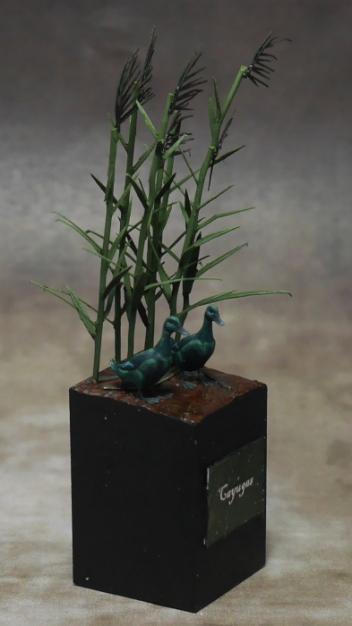 What you probably can’t see in the picture is the footprints I added to the muddier front of the base. I made a simple tool out of a paperclip and a spare etched brass duckfoot. That’s thinking with fire!

Up next are a pair of black-bellied whistling ducks in a mangrove swamp, also called ‘OMG SOMETHING TOUCHED MY FOOT’. It’s not quite finished, as I want to add a very thin layer of water to the base. 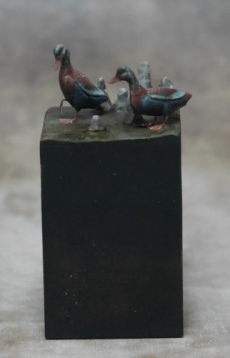 I’d been wanting to do something in the mangroves for a while because, frankly, mangrove swamps are cool. I’m not sure it works entirely because the root nodules look a bit like stalagmites, but that does, however, mean that I now know how to make stalagmites. I suppose that’s a win.

So, with these done, I now have 14 of the wee scenes complete. I was originally aiming for 25-30, so that’s fair whack of them. I also now have to display them in THREE ROWS, which feels like a kind of victory. 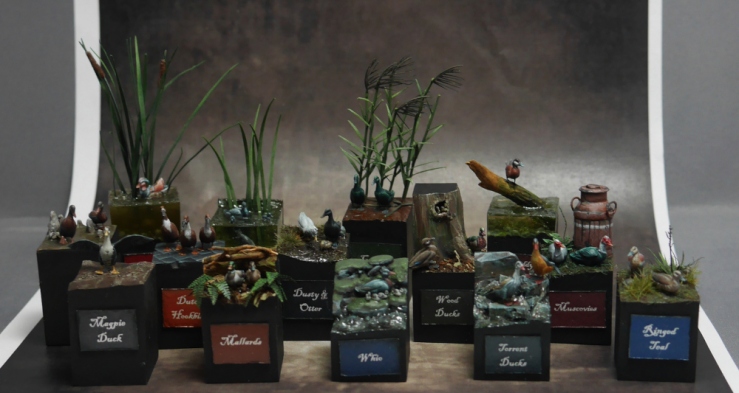 We’re also now approaching the start of the competition season, and I’ve plotted out quite a few of the shows I’ll be attending (and dragging Martin along to, as well), and the ducks will certainly be coming along to most of them in some form or another. So, here’s the schedule:

Sword and Lance is a new one for me, so I’m not sure what to expect except that it’s Up North, which is apparently meaningful to people who are also, from my perspective, from Up North. If you’re going, too, we’ll be arriving the night before and will, obviously, be amenable to beers.

I believe there’s one or two other little local shows I might hit up along the way, so if you know of any, tell me about them and I’ll see if I can fit them into the schedule.

As some might notice, there’s no Duke of Bavaria/Herzog von Bayern listed this year. This is rather sad, as it’s probably my favourite show of the year, but I have some friends who had the gall to get married the day beforehand, and organising a hurried trip back from the other side of the country to then fly out to Germany, or lugging all sorts of wedding stuff around the whole way was going to be a little much.

So, that’s a shame, but I’ll certainly be trying to get back there next year. If you do go, eat some wurst on my behalf. And take pictures of it so I can enjoy them vicariously.