Some more progress on the Occitan knight, who has gained some lovely plates on his shoulders (so in vogue this season) to complement his swanky new crosses and a sword at his hip. 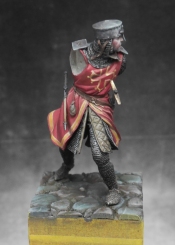 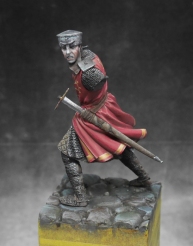 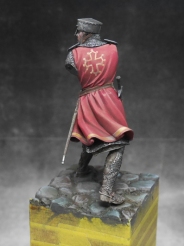 His base has also been worked on, and I’m really pleased with how the colours have come out. I’ll enhance the green/moss a little, and add some pigments for dust that I’ll also scatter over his feet/lower legs and just a little up his tabard (don’t want to completely undo all the work I’ve done there – less is more for dirt and dust in this instance).

His crosses came out reasonably well, but I need to give them a little bit of darklining to accentuate the shape and sharpen things, and to make it look more like something attached to the tabard (presumably sewn on) rather than painted.

With the Duke of Bavaria show coming up in a few weeks, I’m hoping I can get him done to a standard I’ll be happy to show off. I had a look over my other entries last week, and saw that I have quite a few pieces to take along – some more accomplished than others, but as the show works on a display basis, I’m not paying extra to take pieces that someone might get a kick out of.