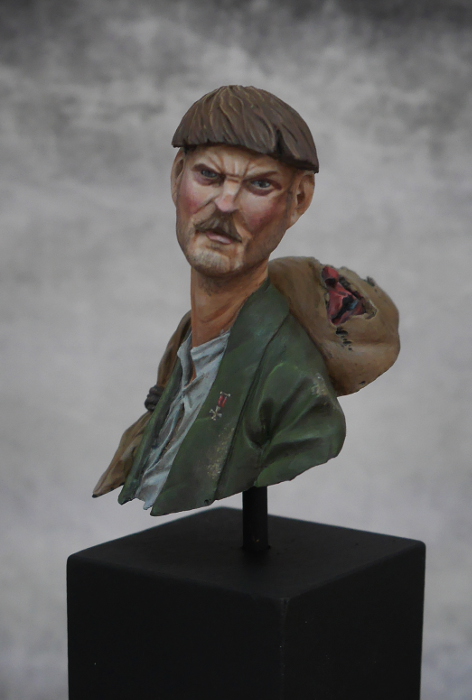 As always, there are more pics over on Putty and Paint. I ended up bringing a bit more saturation into the jacket, which I think really helps pull the whole piece together. I also added a tiny freehand medal to hint towards his previous employment.

Overall, I’m very pleased with him – I learnt a lot working with the wet palette and introducing more colour and detail into the face. Busts are good like that: lots of opportunities to focus on the fun stuff without getting bogged down in yet another pouch, skull or spike, and without needing to build a base.

So, up next is a gladiator I picked up from Pegaso’s bargain bucket at Euro. I presume he’s being pulled from the range, but that’s a shame because he’s actually a really nice piece. He also came with a number of options – different weapons, shields, etc. – so you can build him as a thraex or a hoplomachus. I liked the spear, so he’s a hoplomachus.

I started out by airbrushing him. I don’t often do this because I’m lazy and getting out all the gear, setting up a spray booth, making sure the airbrush is working, then doing all the layers with cleaning in between as necessary, then cleaning everything up at the end is an enormous ball ache. I should probably do it more because it does make some other things considerably easier – like getting an even base colour on the skin. Viz: 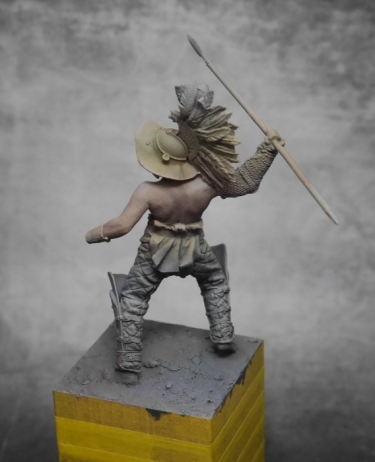 My method here was to undercoat by brush with an old pot of GW Charadon Granite. It’s a lovely dark grey with a green-brown tint, and being one of the old Foundation paints, it’s got great coverage, good durability and it leaves a nice key for paint to go over it. I also like to brush on the first layer because you get to know the model a bit better (as well as making sure you get into every tiny crevice) – you find out about the little quirks, spot mould lines or flash you might have missed, and you get a feel for how the brush will deal with some of the forms.

Over this, I airbrushed a mid brown fairly generously from about 45 degrees, and then VMC Silver Grey from above, but fairly generously again. I like natural ambient lighting, so I don’t want to push really strong lighting too much for this piece. I then focused on the skin, using much thinner paint so as not to undo the previous work, starting with VMC Saddle Brown, then Basic Flesh (I think that’s what it’s called), and a final spot of Silver Grey to reassert the light.

As you can see, it’s nice, but it’s not particularly colourful or dramatic. It’s a really good starting point for the brush, though. This led, over about five hours, to this:

The skin still needs a bit of work to bring more colour in and to focus the light more strongly on his chest and shoulders, but the red is progressing really nicely, as are the quilted trouser-things (ski pants?).

Anyway, he should make a great companion piece to my previous gladiator.