While you might have expected an update about the Roman, I’ll be leaving him aside for a little bit for a couple of reasons:

So, with the Roman set aside, I’ve decided to do a fantasy-ish sort of piece: Vakula, another of Oleksandr Bilibov’s pieces from Mr Lee’s Minis. Go and buy it. It’s great.

The bust is based on Vakula (perhaps obviously) from Gogol’s short story, Christmas Eve. I’ve been a fan of Russian and Ukrainian authors for quite some time (my favourites are Maxim Gorky, Mikhail Bulgakov and Andrei Kurkov – read almost anything by any of them and you can’t go wrong), so there was already quite an appeal.

However, when I first saw the bust in progress, I thought of a different story: Death and the Soldier, which is my favourite fairy tale. If you’re unfamiliar and don’t like reading, it featured as one of the stories told in The Storyteller, which was a show from the late 80s that featured John Hurt narrating folk tales that were acted out by muppets. 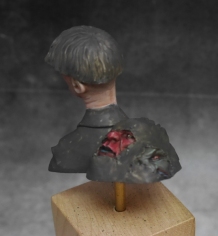 The skin is most of the way there. I’ve pushed more colour than usual into the cheeks using very thin layers of a pure magenta (although the photos are having difficulty picking that up), but there’s still some shading and refining to go. In particular, I need to sort out his left cheek.

If you’re new-ish to painting, you’ll probably read a lot about “volumes”, which is what I’ll be talking about here. When a painter talks about “refining volumes” or “developing volumes” or, perhaps, “getting all up in volumes” or “taking that sexy volume out for a nice dinner”, what they’re talking about is how to apply paint to accentuate a shape. If you’ve come from the GW army painting school, you’ll be used to defining shapes by putting highlights on all the edges. That’s perfectly valid for an army, but it doesn’t generally cut it for high-level display painting.

By way of example, I’ve marked a couple of lines below:

In the untouched image, the face looks alright. There’s more shading on one side than the other, however, which means that the cheek on your right is darker overall and, crucially, less defined. He’s got quite angular features and yet this cheek looks like it’s come from a much rounder face. This is the volume, and the aim of “refining a volume” is to either work with it and make sure the viewer sees it as such, or to work against it and somehow conceal it from the viewer. For the most part, painters want the viewer to see all the key volumes from a distance. You might choose to “conceal” a volume if it’s a silly detail or the cast has come out wrong and you forgot to fix it before painting. If you don’t pay attention, you can end up losing a volume and everything looks a little too soft or smudged.

The lines I’ve marked show where I need to accentuate the shape of the cheek. I’m currently thinking some extra shading should generally do it, but with a slight highlight on the skin near the moustache because of the angle of the light.

And yes, I know he’s a little boss-eyed.