While I was at Euro I, perhaps predictably, picked up a few pieces. I have about five weeks until the next show (Scale Model Challenge over in the Netherlands), so I thought I’d try to get another piece done before then and one of the pieces I’d bought was conveniently small and pretty straightforward: ‘Broken’, which was sculpted by Christoph Eichhorn (perhaps better known as Trovarion) and sold through Mr Lee’s Minis.

I’d seen the sculpt ages ago, and then saw the artist’s own version at Herzog von Bayern earlier this year, which is pretty fab. Later on, Roman Gruba painted a version, too. There’s quite a lot to live up to.

Anyway, I cracked on with it today and pretty quickly discovered that the model is even better for painting than I’d thought. The ‘flexible’ panels over his shoulders and down his spine are especially paintable – I had a lot of fun doing a sort of dark green NMM effect. And then Martin had a Good Idea. Digital camo. Now, you’ll observe that it’s not really traditional digital camo, and there are a couple of reasons for this:

So doing a really accurate digital camo was pretty much out of the question. That’s fine, of course, because you only actually need to make a gesture towards it for people to look and think “That’s digital camo”. This is true of many things in painting: sometimes all you need are the right details for the viewer to interpret something more complex.

Anyway, here’s where I’m up to after a day’s work: 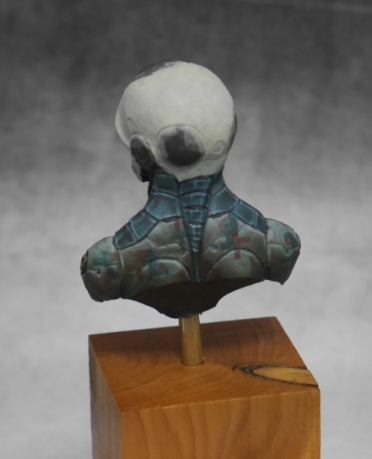 At the current rate, I might even have time to do another piece before SMC.