It’s been some time since I’ve done any work on the ducks, but Martin has finally delivered a new shipment of plinths, so I can get back to it and finish them up for SMC in October. That gives me about two months to do the last few, which should be more than enough, especially as two of those only need their bases.

The first of those, the eider, is pretty much done – just needs some water to fill in the space and he’ll be finished.

You can’t quite see, but I used the duck footprint stamp to add a couple of steps behind him. Hopefully they’ll survive the snow setting.

Speaking of which, before doing the snow I tested it out, because I haven’t done anything with snow in close to twenty years. Somehow. Not sure how that happened, but it did. Anyway, many years ago, I bought some Gale Force 9 snow effect that I’d never used. Rather than going out and seeing what else is available, I thought I might as well test it out, and I’m pretty happy I did.

The test was over grey (so you can actually see the snow, and to test its coverage over colour) on a sheet of plasticard. I tested three methods: 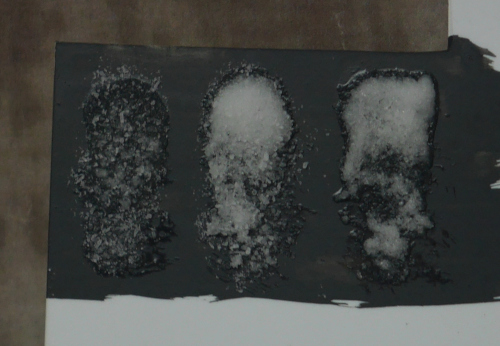 What’s really pleasing is that all of them work pretty well for different types of effect. I can see 1 working well for frost or a very light dusting of snow, 2 for nice powder, and 3 for partially melted or icy snow. It also has the benefit that it’s quite sparkly without having to deal with crushed glass or microballoons, which come with not insignificant health risks.

The other thing I got to try out was my new set of ‘Scalecolour Artist’ paints, which I finally got from the Kickstarter a couple of weeks back. I used these to paint the eider’s base (and contrary to appearances, there’s a lot of blue and green in there; it’s not greyscale – blame the lighting and the fact that it’s mostly in shadow). I was a little concerned as I’d not seen anyone talk about them online, and I know some people got them well before me. I suppose in the meantime the GW Contrast paints had come out, and maybe that just drowned them out. Or maybe everyone’s still hyped about the Kimera Kolors.

I can, however, unequivocally state that I love the Scalecolour paints. They’re exactly what I should have been using years ago. I have no idea why it took so long to move to tube paints, other than that it just didn’t occur to me because all of the ‘hobby acrylics’ are bottled. I still like normal Scalecolour paints and Vallejos, and I have a few from other manufacturers, but the Artist range is definitely going to take over a lot of roles.

So, my key thoughts on them:

Anyway, hopefully I’ll get to use them on something that doesn’t end up hiding in the shadows soon. It feels almost criminal to use them for basing.

Up next, basing for the crested mergansers and I’m building a shoveler duck, which has a massive shnoz.