Obvious first things first: the ducks took Best of Show, which I’m still pretty overwhelmed by. More on that later – as is tradition, pics first. Also as is tradition – apologies for the pics. My traditional list of excuses:

Anyway, with the traditions out of the way: 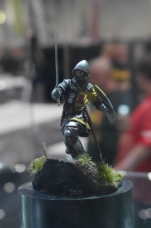 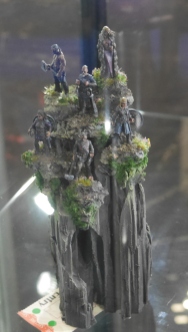 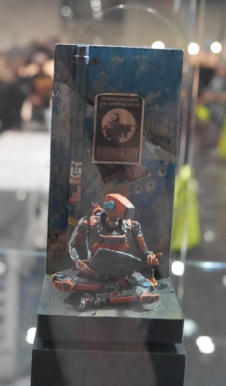 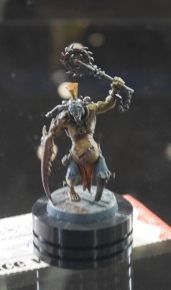 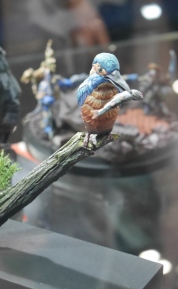 In the end, as I say, the ducks took Best of Show, while the Occitan knight made it to the finalists table and the WWI chap, once again, failed to get anything. It’s almost funny – I know he’s a good piece, but there’s obviously something that makes people see straight through him. Perhaps the unending brown-ness of it all.

Anyway, the ducks. I guess they demonstrate that a good idea can be as good as a technically excellent piece. If you compare the ducks to any other piece on the finalists table, I strongly suspect you’d have to conclude that the ducks are the weaker paintjob. They don’t have anything flashy going on, the blends aren’t perfect, the textures are occasionally haphazard or weird. I can barely paint the eyes. The bases are nice and varied, but they’re nothing on most others.

What the ducks do have is novelty. Salute, perhaps more than other shows, is a gaming show and that really comes through in the entries – the overwhelming majority are soldiers or monsters, or something else of that sort. If you present them with something so completely different from what they’re used to, you automatically catch some attention, and any attention from the judges is a Good Thing. It can be very easy to be overlooked if you don’t have something to catch the eye – I guess most of the time that thing is ‘amazing paintwork’.

The other thing the ducks have is scale, in a sort of weird sense, given they’re tiny. By presenting 15 bases of ducks, each with its own little scene, I sort of cheated – I basically made 15 vignettes and pretended they’re all one entry by sticking them on a block of wood. Having said that, that’s part of the project: I want the ducks to feel like the illustrations from James Audubon’s Birds of America, or like those little taxidermy scenes in museums. I guess I like the idea that my work might be sort of educational (who knew all those varieties of duck even existed? I certainly didn’t before I started this).

In the end, I’m really, really pleased that people enjoy the ducks and that, perhaps, what I’m trying to achieve is successful. I never considered myself the kind of painter who would ever win a best of show simply because I lack the technical ability that so many other painters can manage – I’m pretty happy being a decent painter who gets a lot of enjoyment out of pushing paint around (and very little joy from pushing putty around). I do, however, also like doing things that perhaps other people haven’t considered. I’m sure I’ve mentioned that before – like converting Latorre’s pirate bust by gouging out his chest.

My next project probably won’t be as successful, but I do hope it’ll be at least as interesting (and perhaps a little confrontational). Speaking of which, I need to commission a few sculpts – including a flat – so if you happen to be willing to trade your talents for my money, do get in touch.

p.s. I have now heard possibly every joke about eating duck. You’re all terribly, terribly witty and original.