I know I should steer away from saucy or titillating titles like this, but it’s hard to resist. A merkin, for those lucky enough not to have heard of them before, is a pubic wig. Women used to wear them if they’d had to shave due to lice, or for other reasons that are entirely their own business. Men probably thought they were hilarious to glue to their chins. I refer to them here because the process of putting grass onto Jeremiah’s base had it looking suspiciously like a merkin was involved.

Unfortunately, I didn’t get a picture at that stage, but needless to say a mat of grass that’s been sprayed brown and lightly glued onto a base is just a little suggestive.

Anyway, that stage has now been passed (I hope) and Jeremiah is basically finished: 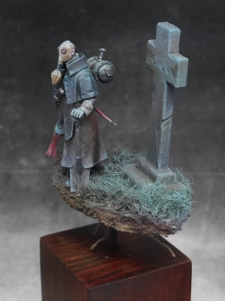 I just need to add a couple of little details and then he’ll be finished.

The grass itself is a product I picked up years ago because I don’t really like the look of grass tufts in some instances. Here, for instance, longer grass is more suitable to make the grave appear neglected.

If you’re interested in the product, it’s Heki Wild Grass, which comes in a sort of sheet mesh and is probably intended for model railways or large dioramas. I usually cut off a section slightly larger than I need, airbrush any extra colour I’d like onto it, then glue it down with PVA. This is when it looks like a merkin. To make it look more like it’s actually growing out of the ground, I poke it around with some thinned PVA, pressing it into the base and sort of sculpting tufts or movement as I go. Once that’s dry, it’ll often be a little glossy, so I airbrush it again to put the light in place, then have a go at it with nail scissors to vary the length and make it more natural.

All in all, I think it’s a pretty effective product for this sort of grass.

Up next: the skirt. This isn’t nearly as saucy, and it should be pretty obvious what I mean: 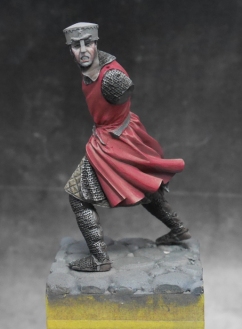 I’m really quite happy with how he’s coming along – the red sets the other parts off nicely, and the blending isn’t too rough. For anyone interested (because red can be a real pain in the arse), the red is done with only three colours: GW’s old Mechrite Red (one of the foundation paints), highlighted with VMC Sunny Skintone, and shaded with GW’s old Scaly Green. Easy peasy.

Up next will be the top half of his surcoat, Occitan crosses, then the belts and straps, then I can give him his arms. Lucky chap.

I haven’t yet decided what I’m doing with his helmet – I’d ordinarily go straight for metal, but the box art has it in the same colour as his surcoat, which is also pretty tempting.