Last week, I took wee Martin down to London for the BMSS Annual Show. I was there last year and enjoyed it, and he was keen to collect some trophies (because that’s all that motivates him nowadays – where did I go wrong?). Unfortunately, I managed to forget the camera, so I only have a few very dodgy phone pictures, which really don’t do justice to any of the pieces. 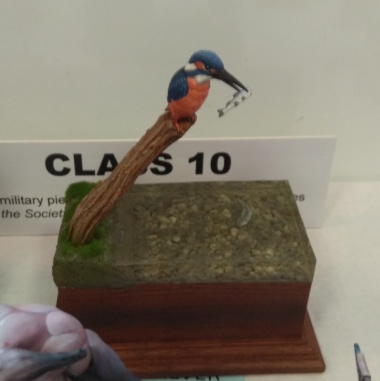 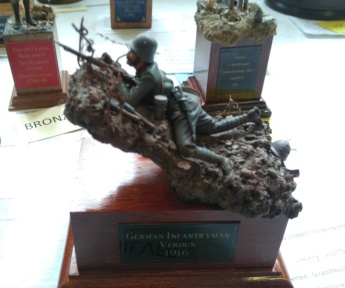 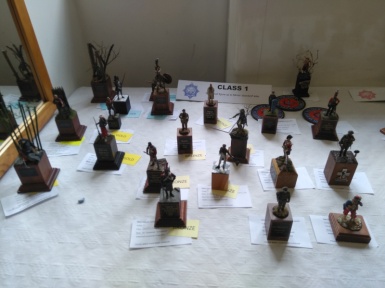 These are the only pictures that are even remotely worth including – the rest were even worse. In my defence, the lighting in there is utterly terrible. I think moving the tables to the opposite wall would instantly improve things.

I had taken the WWI chap and the ducks down, thinking that perhaps this would be the show that the private from Lincolnshire might finally get some recognition, but he had other plans and failed to make it to the show intact. In fact, the whole wine and cheese shop decided to break in half. I have no idea how it managed to do this, but suffice it to say that he’s retired now. Long may he be miserable.

The ducks, meanwhile, got a gold and an honourable mention for the President’s Medal, which was pretty cool. Martin, of course, took everything he’d painted for the last six years and was very pleased with himself.

Meanwhile, I realised that I needed to polish up the ducks a bit – the homemade plaques are really rough, and the pics I’ve seen online highlight that. So I went ahead and got in touch with Name It Plates and had some done professionally:

I think these work considerably better. Name It were incredibly helpful – these are a custom size and needed a pretty quick turnaround, and they were faster than I expected (about four days from initial contact to having the plaques in my hands!), and they even gave me a discount for bulk. I’d recommend them to anyone.

You might notice that Dusty and Otter aren’t in there – Dusty was coming loose, so I had to make a slight repair. They’ll be back in the display for Euro. You might also notice that there are a couple more – a shelduck and a paradise duck. Paradise ducks are native to New Zealand and actually buck the trend of females being less colourful. This one isn’t quite finished, but is complete enough to join in the fashion parade here.

Along with the northern pintail I’m working on, that will bring me up to 18 ducks, leaving only seven or so to go. I know I want to do runner ducks, an eider and some crested mergansers, but I’m not sure about the last few after that. If you happen to have a favourite duck, I’d be keen to hear. Might knock something loose.